I create this post in order to talk about the package organization in Orekit. As the next version of Orekit should probably be the 10.0 it could be interesting to open a discussion on this subject.

I will illustrate my remarks with an example. Current architecture of org.orekit.models.earth package is: 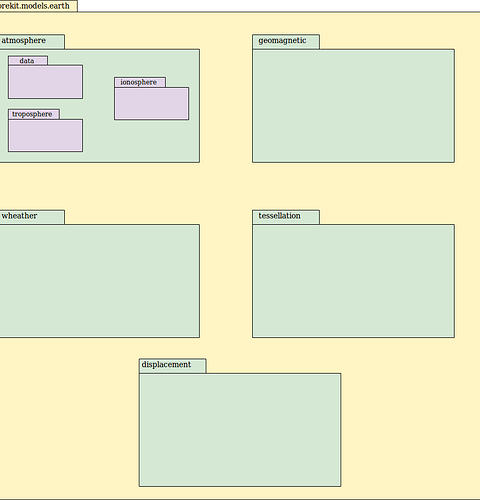 What is your opinion about that ? Have you any idea of what kind of organization can improve the package architecture of Orekit ?

As more and more is added that sort of thing can become important. I like the idea of playing around with the structure to see if is more self discoverable.

IMHO, the most important before doing any refactoring, is to clearly explain the motivation.

Having a clean organisation, easy to understand is a good motivation. But it is just a convention, quite subjective and could be discussed over and over.

Finding a technical motivation could be a good allied.

For example, classes in the same package can see each-other more easily (no import, dedicated visibility of class-members). An other idea is that Orekit is currently a monolithic component. Using packages in a given way can let prepare a modularization (for example, why should I bring Earth related classes when I’m creating a deep-space software?).

So, depict a rule, draw a line and let’s go!

At the beginning, my motivation was rather having a clean organization. I took the example of the models package because it is not easy to understand because of the diversity of the classes inside it. Moreover, as new “models” are implemented each years, the number of classes inside this package can become significant in the future. That’s why I think that it’s time to start a clean organization of this package.

I understand that for some other packages of Orekit the technical motivation can prevail. Especially, the argument of the class visibility. In that way, a reorganization cannot be possible.

I do agree that the models.earth package need some sub-packages for clarity.
I would go for ionosphere and troposphere for a start.
atmosphere could definitely go there too if it does not imply a lot of changes due to package visibility as @gbonnefille mentioned.

But contrary to what I said before I do not think that iono and tropo should be nested in atmosphere anymore. Although they are physical parts of the atmosphere I don’t think they depend on the atmosphere package.

Indeed, ionosphere and troposphere models do not depend on the atmosphere package.

For a start what we can do is:

Are you agree with this organization ?

Sounds good to me

I opened an issue #548 on the forge for this enhancement.