I’m trying to use the FieldOfViewDetector and need to make a FieldOfView object. So, am trying to create a CircularFieldOfView, but am a bit confused on the constructor:

HalfAperature and margin make sense as simply radian inputs, but I can’t seem to get center to work. What would be the easiest way to get Vector3D center through an attitude provider.

Also, I’m a bit confused how to access the spacecraft frame–do I get that frame from LocalOrbitalFrame or is it somehow imbedded in the propagator?

Any advice would be incredibly helpful!

One example would be to have a spacecraft with an attitude such that the Z axis of the spacecraft points towards the Earth, the Y axis is opposite to orbital momentum, and the X axis is therefore in the orbital plane, roughly in the velocity direction (exactly along the velocity if the orbit is perfectly circular). Then, on this spacecraft, you could have a telescope observing ground. The center of the corresponding field of view would by the spacecraft Z axis (i.e. coordinates (0, 0, 1)). This is what we call a FoV defined in spacecraft frame.

So the spacecraft frame is really a conventional frame from spacecraft blueprints.

Please note that TLE propagator performs the propagation in TEME frame. Therefore maybe it could better if you use propagator.getFrame() instead of FramesFactory.getEME2000().

Thank you both so much for the help–really think orekit is a very cool open source program that a lot of universities and small sats clubs are trying to use, and this forum makes it really easy to slowly learn it. Quick followup, though on this question…

So I got my field of view detector to almost work, but it is giving the visibility of the point at the opposite side of the earth (see picture). Any advice on why it’s giving the point opposite to my ground station point? Here’s a summary of my code:

It’s very strange to me that the g function is negative for the orbit over the opposite side of the earth (as if it’s looking through the earth) as you can see in this picture where the ground station is at (0,180) but the detector returns times over (0,0). 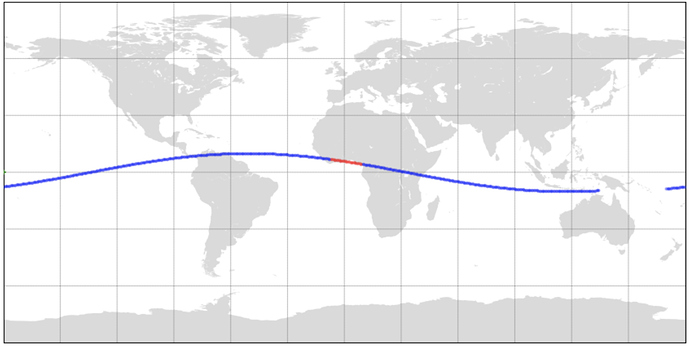 This is an well known unfortunate side effect. The g function is computed by looking at the line that joins the spacecraft to the target point with respect to the field of view. The target point is just a point, the detector does not really know it is on an opaque central body and it can be seen only from “above”. So yes, the detector sees through the Earth.

This unfortunate effect can easily be removed by using a boolean combination of two detectors. What you want is to have both the target point in the FoV and the spacecraft as seen from the target point above the horizon. So you can set up two raw detectors, one FieldOfViewDetector and one ElevationDetector, combine them using boolean operations which works for detectors that have a semantic of positive/negative g function associated with some active/inactive feature. You have to know the meaning of the various g functions to perform the proper boolean operation. The FieldOfViewDetector function g is negative when the target is visible and positive when the target is not visible. The ElevationDetector function g is positive when the spacecraft is visible (above horizon, taking into account elevation masks and refraction if you want) and negative when the spacecraft is not visible. If you want your combined detector to behave like the ElevationDetector (i.e. being positive when target is visible), then you should use the following combination: